Bigger investors can afford to take greater risks and ride out market downturns. The wealthy get wealthier because they invest differently, not because the stock market is rigged! Those with fewer resources also might be more likely to “cut their losses” when stocks go down, especially if they are dependent on their investments for income. Here’s a fictitious comparison to illustrate my point: 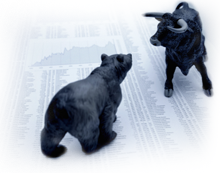 Less-Wealthy John had $300,000 in cash, a $150,000 “interest only” home mortgage, and a $15,000 car loan. He drew $2,000 in Social Security benefits monthly, but had no pension. Each month he paid $500 on his mortgage and $300 on his car loan. To cover all his expenses, John needed another $2,000 a month to supplement his Social Security. On January 2nd, 2008, John put his $300,000 nest egg to work in the stock market. Instead of hiring a professional adviser, John figured he’d save on fees by immersing himself in financial magazines and TV shows. His “do-it-yourself” plan included 1,000 shares of GE at $37.10. Over the next thirteen months of market mayhem, he checked his portfolio a dozen times a day. John’s financial worries were compounded by having to liquidate more stock each month to get the same $2,000. He was particularly concerned about GE because it was one of his largest holdings. Ultimately, he panicked and, without an adviser to intercede or guide him, he sold all 1,000 shares of GE stock at a loss of $19,000. And, with TV predictions of further market declines, John sold the remainder of his portfolio a few days later. Figuring in all losses and withdrawals, John’s account shrunk to $150,000.

No, the market is not rigged. The real key to successful investing is not being in a position where you need to draw income from a potentially declining portfolio – or are susceptible to emotional decision-making. (More myths to come next week.)