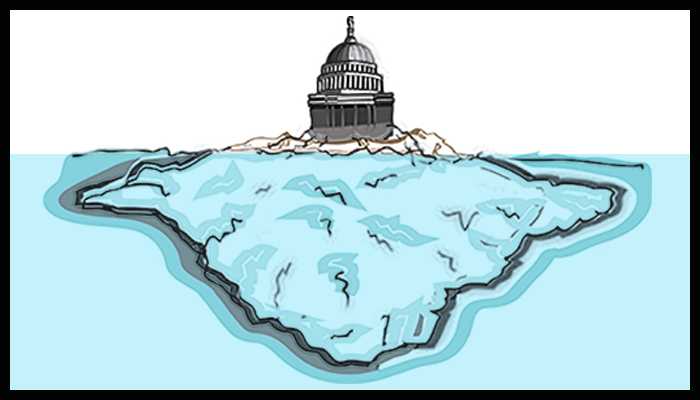 I held one of my Financial Forums, recently. A member of the audience raised his hand and asked me if the stock market is being influenced by Russia. My response was, “Which news story are you referring to?” He replied (and I paraphrase), “Well, President Trump, and his campaign’s involvement with …” Respectfully, I had to stop him and explain that I don’t talk politics at my Forums. Are politics important? Yes, of course! Here are my thoughts on the subject.

There is an unending bombardment of political “news” from the media, so you should carefully filter out the noise. Keep in mind that the media sells everyone’s ears and eyes to the advertisers that pay for their TV programs, radio shows, newspapers and magazines. When it comes to politics, in particular, there is just so much we don’t know. It’s kind of like an iceberg. Only 10% of the iceberg is above the water; it’s all we see; the other 90% is below the surface. We don’t have all the facts most of the time.

Let’s say the economy is doing well, the jobs report is good, companies are prospering, inflation is tame, but there’s some sort of political upheaval that concerns you. You get nervous and want to pull your money out of the market. You could be making a big mistake by reacting to the political “news of the day,” instead of using sound, well-thought-out decision-making about your money. I encourage my clients to look at the economic data. What is happening with interest rates? The Fed? The stock market? Small, mid-sized and large corporations? Read financial data, not headlines.

How does this translate to the adviser you choose? Ask yourself, are the political views of my adviser important to me? Is politics something I want to talk about with my adviser? Is it something he/she wants to discuss? You probably don’t want an adviser who is oblivious or apathetic to politics, right? But, on the other hand, do you want a zealot? Will current political news cloud the adviser’s judgement or logical thought processes? I’ll be happy to sit down with any of my clients to discuss my views on politics, if that is, indeed, something they want to know. I won’t, however, bring a divisive topic into a public discussion because it can quickly derail the subject at hand.

To sum up, take care when listening to the 24/7 news machine. Be aware of what the media is “selling.” Know that we, the public, are just seeing the top part of the iceberg, especially when it comes to politics. If you are strongly opinionated, you could choose an adviser whose views align with your own, but make sure he/she can remain clear-headed in his/her decision-making. And, finally, do your due diligence. Take some time to look at the economic data, yourself, so as not to base financial moves on political headlines. If you do that – you guessed it – you’ll plan stronger!